Join us for a night of live podcast recordings from We Have to Ask, The Digression Sessions and Hobo Radio and improv brought to you by the Baltimore Improv Group.

2016 has been a rough year filled with tragic celebrity deaths and awful headlines. It’s time to say so long so we can look to the future. It’s time to look to 2017: The Year of Peak Sloth.

So before you head out to drink and party 2016 away, join the Peak Sloth Podcast Network for a live podcast event at the Single Carrot Theatre!

Admission is free! Beverages may be available! Live music may be part of the show! Celebrity guests may be interviewed! The only way to find out is to be there!

Remote Possibilities makes their debut at the Single Carrot Theater tonight at 8pm.

It will be a special show because we will have some SPECIAL GUESTS!

The only way to find out who is to pay $5 and come to the show.

Nice! This reminds me a lot of the Look Around You series that parodied British science television.

After today, there are only two more days in 2016.

Coincidentally, that’s two final opportunities to see me do some improv comedy!

Friday, Dec 30th, at 8pm, come see Remote Possibilities make up a TV show for you at the Single Carrot Theatre!

Finally, on New Years Eve, from 6-8pm, also at the Single Carrot Theatre, have a few drinks and laughs with us at the Peak Sloth Podcast Network’s live podcasting event! We’ll have live shows from The Digression Sessions Podcast, HoboTrashcan.com’s Hobo Radio, and We Have to Ask featuring special guest Heather Moyer! But that’s not all! We’ll also have some improv thanks to some wonderful players from the Baltimore Improv Group!

So come on out and laugh as 2016 finally drains away!

Loving these so far! BTW - what license (if any) are you making your #100daysofmusic posts available under?

This sounds like a really great challenge either way! I am rooting for #100DaysOfIndieWeb because I learn so much about #IndieWeb from your stuff.

Thanks to our guest Terry Withers for makin’ it hot this week!

I love my Brompton. They fold so small that I typically carry it in wherever I ride it. It’s amazing for multi-modal travel; I’ve taken it on buses, trains, taxis, and ferries.

Marty McGuire
📗 Want to read How to Make Sense of Any Mess: Information Architecture for Everybody by Abby Covert
#books
🔗 December 18, 2016 at 12:00AM EST • by 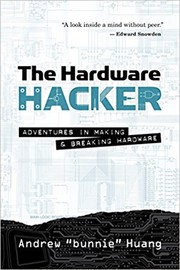 Aaron Parecki
post from December 17, 2016 at 11:16AM -0800 Why Microformats? Owning My Reviews
Back in October, I wrote a bunch of short mini-reviews on products and services that I use regularly. I published them all on a single page called "Favorite Things". In the past, I've written a couple of reviews on Amazon and then copied them to my website as a blog post.I …
🔗 December 17, 2016 at 2:44PM EST • by

Marvel at the improv stylings and comedic flourishes of BIG’s best performers.

It’s overdue, but the new TOS pushed me to act. Tonight I liberated my Evernote content. Likely will import into laverna.cc.

Baltimore's final Homebrew Website Club meet up of 2016 happened at the Digital Harbor Foundation Tech Center on 12/14/2016. We had a nice quiet writing hour followed by discussion and demos!

Notes from the "broadcast" portion of the meetup:

Jean-Carlos Cedré - Has an older website. Wants to revisit it and get portfolio pieces on there. Might want to move off of Wordpress.

Marty McGuire (co-organizer) - Completed image-related 2017-01-01 commitments. Needs to write up some new ones. Working on owning his own events. Event posts with photos now get a nice Facebook-inspired poster look to them. Added upcoming events section to home page. Wants to add RSVPs to that list. Also working on a new micropub client for creating and RSVPing to events. Discussion led to the name suggestion "Slater".

Adam Bouhmad - been focusing on classwork, Docker, GitHub issues. In 2017 wants to get back to working on a malware collection site, starting with a UI design.

We also took the time to tune in with the Virtual HWC meetup. Sorry to all the folks in quiet time that had to listen to us have our social time. :}

Join a community with like-minded interests. Bring friends that want a personal site!

Any questions? Ask in chat: http://chat.indieweb.org/today#bottom

Sure, I know you’re excited about the chance to see live shows from The Digression Sessions Podcast and Hobo Radio, plus improv from the Baltimore Improv Group along with snacks and booze.

Let me add fuel to that fire because Jonathan and I will be putting on a live, improvised episode of We Have to Ask with EXTREME SPECIAL GUEST HEATHER MOYER!!

Did I mention that admission is free??

martymcgui.re
post from December 6, 2016 at 10:16PM EST
Single Carrot Theatre 2600 N Howard St Baltimore MD 21218
2017: The Year of Peak Sloth - Live Podcasting Event
Join us for a night of live podcast recordings from We Have to Ask, The Digression Sessions and Hobo Radio and improv brought to you by the Baltimore Improv Group.
#event #peaksloth #wehavetoask #newyearseve
🔗 December 13, 2016 at 3:59PM EST • by

Thanks to our guest Jon Ulrich for putting the old in old school for this episode!

Great post from @aaronpk about his #IndieWeb setup. I should make one of these!

Aaron Parecki
post from December 12, 2016 at 1:24PM -0800 A Brief Intro to My Website Architecture
This is a description of all the pieces and tools that I use to post to my website and handle comments and responses. Many of the pieces are open source and/or based on open protocols that you can implement yourself.WritingI write posts using an app called Quill. It's an open …
#IndieWeb
🔗 December 13, 2016 at 9:43AM EST • by

I am going to Homebrew Website Club Baltimore on 12⁄14!

Can’t make it out physically? Homebrew Website Club also has a virtual meetup this time around!

Great writeup by http://jonathanprozzi.net/ about the positive effects of setting aside even an hour a month to learn and work on new things.

@mkphenicie It’s so true! I can’t believe she’s in our improv troupe!

Thanks to our guest this week Kristin L. McKenzie for teaching us that there are always more ways to share.

Rescuing my tiny videos from Vine

Personally, I didn't make very many posts. Most that I did centered around my involvement with the BlinkyTape Kickstarter that we ran at the height of my awareness of Vine. So, while I had not thought about Vine for quite some time, I was disappointed to hear that it was shutting down the ability to upload.

Announcement like these tend to trigger my site-deaths reflex, so although they have announced plans for some kind of easy export mechanism, I thought: why wait?

This post documents the haphazard, poke-it-with-a-stick-and-see-what-happens method by which I rescued my Vines and their metadata to post them on my own site.

Getting all my Vine URLs

First up, I needed a way to get all of the permalinks to my Vines. The first stumbling block here was that Vine uses an "infinite scroll" technique that shows only the latest vines until you scroll down the page, triggering it to load more for display. Checking out the source of the page, I realized that I could simply scroll to the bottom of my List view to get all the Vine metadata loaded into the page, and I could then open up the Developer Console for Chrome, and drop in a short one-liner to print out all the URLs for my permalinks:

After copying this to a text file and editing out all the quotes and commas, I had a simple text file with the permalink for one of my Vines on each line.

Next up, I grabbed the HTML for each Vine's permalink with a simple script:

It's often "enough" to have all the HTML on a page - you can write a script to parse the HTML, select out various attributes and text values from the elements on the page, and grab whatever data you need. In the case of Vine, they make it a little easier. Each HTML page has an embedded <script> element in JSON-LD format:

After playing with the data in there a bit, I wrote a quick script using the pup command line tool to do parse the HTML and extract the (valid parts of the) JSON-LD chunks from each HTML page.

These JSON-LD chunks gave me all the metadata I cared about, including URLs to the media that I wanted to save: the videos, their thumbnail images, and the avatar image that accompanied each post. So, it was time to write tools to extract those, too. One of my recent favorite command line tools is jq aka "sed for JSON", so I used that to extract the URLs I needed to fetch all the media.

And finally, the avatars. I really could have just manually saved my one avatar image, but that is not my way. Instead, this script finds every avatar URL, hashes that URL to get a filename-safe name, and fetches it (once):

Finally, it was time to synthesize all of this info to put these Vines on my own site. I currently use Jekyll to generate my website, so I wrote a pair of scripts to convert the JSON-LD data into Jekyll posts. First, a Python script that converts a single Vine into a Jekyll post with YAML metadata:

And finally a shell script to run the Python converter over each JSON-LD file, save the resulting Jekyll post output in the appropriate place, and copy over the related media assets:

At last, I created a Jekyll include to render the Vines out as HTML5 video elements, with the thumbnail as the poster image, visible play controls, and the obligatory feature of looping forever once started. My Jekyll theme is a bit out of scope for this post, but it pretty much looks like this:

What is the end result? How about some example posts?

While I am not particularly happy that Vine is seemingly closing down, I do enjoy data liberation projects like these. I learned a bit about how Vine was built, got to play with some neat tools, and I now own my Vines, having brought them into my own site. While I'm not in control of whether Vine works in the future, I do have control over the future of the videos that I posted there.

Was this useful to you? Let me know! I don't have my #indieweb comments system in place, yet, but you can hit me up on Twitter or Facebook and I'd love to read your thoughts!

Almost went for the Nitro cold brew at 3 Bean. Made a more relaxed choice of tea at the Bun Shop.