I went! What a great time! 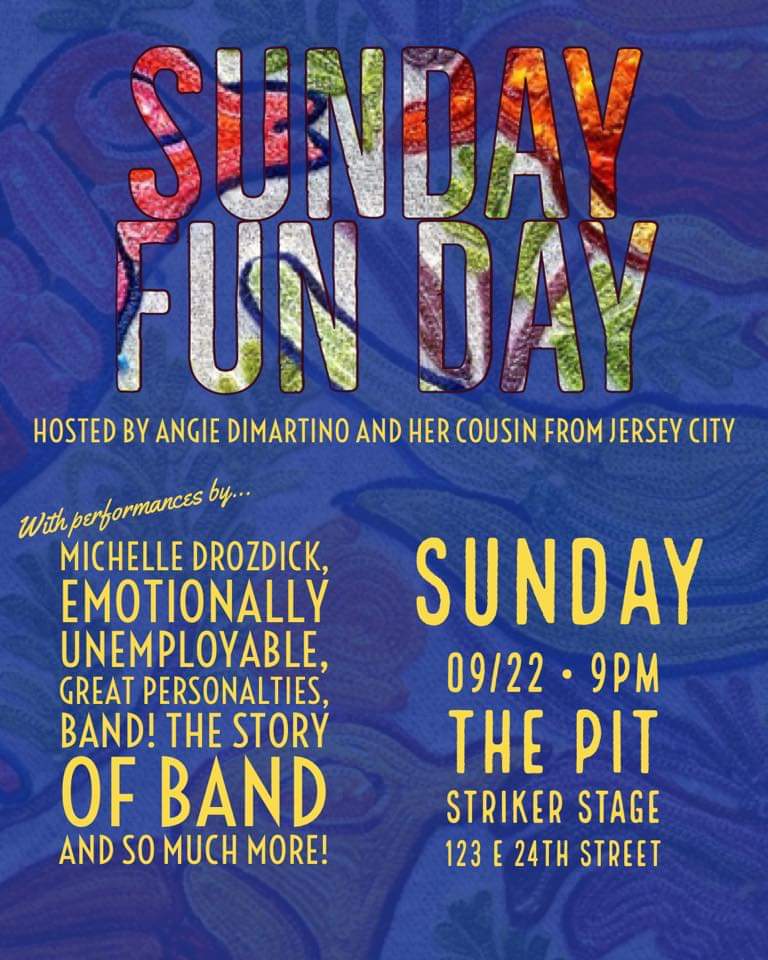 9PM at The PIT Striker stage!

This year was my FIFTH Camp Improv Utopia East and gosh I love it.

I did a pretty bad job of capturing it in photos, but here is what I have!

The first step of any Camp is Getting to Camp! In the past I have rolled up with members of the Baltimore crew (shouts!) but having recently moved to NYC, I needed to find a new way there!

Reaching out on the Camp East group on Facebook, it didn’t take long before the amazing Sarah Anne said that if I could get to Philadelphia, I could ride with her. I knew how to do that, so I said yes!

Turns out I would also be riding with long-time camp buddy Ruth Hiner and former-Philadelphian and all-star improvisor Kristen Schier!

We had a lovely ride, singing along with Lizzo, until Sarah’s stereo went and died in the middle of the ride. 😱 Undaunted, we kept the music going with musical improv games.

In short order, we were at CAAAAAAAAAAAAAMP and I checked in to the Fred Rogers cabin. 😍

After dinner is the main welcome to camp, including introducing all the teachers, cabin counselors, and of course the always-important rules delivered in semi-improvised sketches. For example, DRINKS GO IN THE BOATHOUSE, which I later demonstrate here.

Click or tap the image to view the panorama

After all that it was time for the new and improved Camp Cameraderie Experience. The Rogers cabin really brought it this year, with matching sweaters, and a running soundtrack of uplifting songs from Mr. Rogers’ Neighborhood. My highlight, apparently, was this dramatic match at Nick Armstrong’s Ping Pong station.

The CCE was a great and exhausting experience, but it was no time to rest! I had crafts to make with Kim and Julia for an extremely short GHOST PARTY show later that night!

After dinner and the evening workshop (Bill Arnett “Alternative Approach to Scenework”), it was time for Tiny Camp Fest.

Always a silly time, TCF packs a whole festival into a very short period of time, with tons of never-before-seen-and-never-to-be-seen-again-camp-exclusive teams and workshops.

I photographed none of it. 😭

My pictures are terrible, but Robyn took some good ones.

Rogers Cabin counselor Katie P. not only embodies the Fred Rogers spirit every day through being a wonderful person, she also printed out these Fred Rogers quotes to inspire the rest of us to be our best. I swear more of them appeared in the cabin each day. Here’s one in the bathroom.

Sunday’s structure follows Saturday’s. Breakfast (not pictured), warmups (pictured), walking past the Guinea fowl who really hate this insulation, and morning workshops (not pictured). I had Rachel Rosenthal’s workshop on Trust the Pattern, which had a lot of great group games!

Finally, we had dinner and our last workshops (I had B.O.C.’s workshop on Position Play).

And then it was the closing ceremonies and PARTY TIME. Remember how I said Rogers cabin did pretty good at the Camp Cameraderie Challenge? Actually, we won! So many points for spirit combined with excellent teamwork combined with Heather Marie’s clutch kayaking and Dan’s deadeye archery leads to ROGERS VICTORY.

Sunday night is both karaoke night and onesie night. So you know it’s gonna get weird. Seeing Jaclynn lifted into the air by progressively more people was pretty amazing. 😂

I left during the last karaoke song (Bohemian Rhapsody, naturally), and could still hear it all the way across the camp. Unfortunately, my camera could not hear it, but here is a lovely quiet video and my attempt at photographing a GREAT impending sunrise that was still a couple of hours away.

Camp is over! 😭 I rode back to Philly with Sarah Anne, Ruth, and Kristen. Then I took the best train ever back up to NYC!

Another year, another fall, another CAAAAAAAAAAMP on the books. Camp is always a special time with special people. I have been scouring the Facebook group for good photos of me and others and will cherish them for the long days until next camp.

Oh, and here are some random photos of food.

Marty McGuire
↩ Replied to https://adactio.com/notes/15772
Jeremy Keith
post from September 4, 2019 at 3:52PM UTC
Anyone else going to View Source in Amsterdam coming to Indie Web Camp too?

Facebook coming through with some pretty gross new UI changes, now adding little badge icons next to some people’s names indicating that they are a “Conversation Starter”, “Visual Storyteller”, and possibly others.

Really raises some questions for me. Mainly, what are their goals for this “feature”?

Marty McGuire
Reacted 💜 to https://beesbuzz.biz/blog/5462-Alec-isolation-solidarity
fluffy
post from September 3, 2019 at 12:27PM -0700 Alec, isolation, solidarity
Scott Benson wrote a more detailed, public article about what had been going on with him and Alec Holowka. Please read the whole thing, but I want to especially highlight this paragraph:
🔗 September 3, 2019 at 4:08PM EDT • by