I first learned about the IndieWeb community in summer of 2015 and was drawn to the IndieWeb principles of owning your own data (on your own domain), building things that you use yourself (a.k.a. "selfdogfooding"), and having many folks building lots of different tools that work together. I have spent the time since then occasionally checking in on new developments on their wiki and #indieweb IRC/slack chat.

Over the weekend of August 27th-28th, 2016 I attended my first IndieWeb event at IndieWebCamp NYC2!

You can find lots of detail about the specifics of the event from the IWC NYC2 wiki page, including links to notes and live streams from each session. Here are some of my own highlights from the weekend.

Following the intros and demos for Day 1, we broke into self-organized topic sessions and I got to sit in on several really interesting discussions:

After breaking for the evening, I joined a few folks in heading down to Manhattan's Lower East Side to Top Hops Beer Shop, followed by Chinese-Mexican fusion cuisine at Mission Cantina.

Day 2 was a hack day, with the sounds of a passing parade and festival outside, excellent sandwiches for lunch (thanks, Emma!), lively discussion, and fun stuff to hack on. My project was to make it possible to post 360 photos (e.g. from the Ricoh Theta S) into my site in a way that folks can pan and zoom in their browser and on mobile. Thanks to Google's VR View project, I was able to get this up and running very quickly, including support for mobile that allows looking around by moving the phone (with Cardboard support, even)! You can find my demo post here. I also wrote it up on the IndieWeb wiki /photos page for folks that would like to do the same.

Thanks so much to our host Emma Hodge and Dalberg Global Development Advisors for the use of their lovely space. Thanks also to co-organizers Tantek Çelik and David Shanske, and to everybody that I met.

It was amazing to meet these folks whose work I have been following for a year, and I am excited to keep working to "be more IndieWeb" myself, including stepping up and organizing some IndieWeb events of my own here in and around Baltimore!

So, are you tired of having all your online content owned by Facebook or Twitter? Get started and join the IndieWeb! Say hello in #indieweb chat! Look for a Homebrew Website Club or upcoming IndieWebCamp near you!

Chillin with Hunter not watching the VMAs. 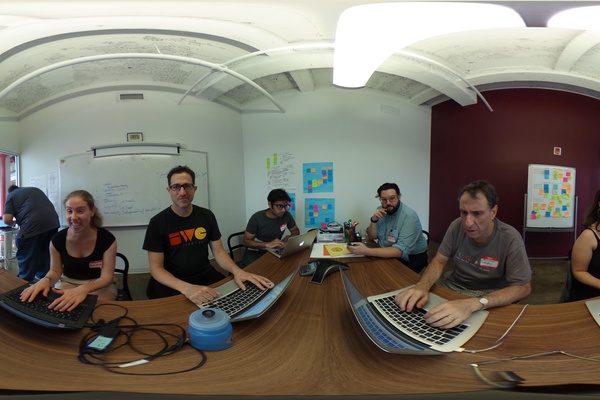 Click or tap the image to view the panorama