I tweaked my little Hershey Fonts in JavaScript toy a bit. Now, the SVG data that it produces is at the right size and scale to plot on a sticky note on a MakerBot Unicorn.  Save the SVG content, load it in Inkscape, and save it as .gcode using my Inkscape extension for Unicorn.

At long last, after a bunch of little thing-a-days, I can write out a sticky-note: 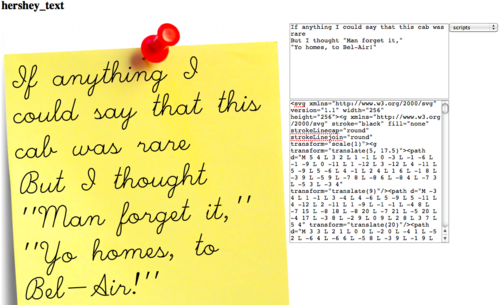 Save the SVG data and open it in Inkscape: 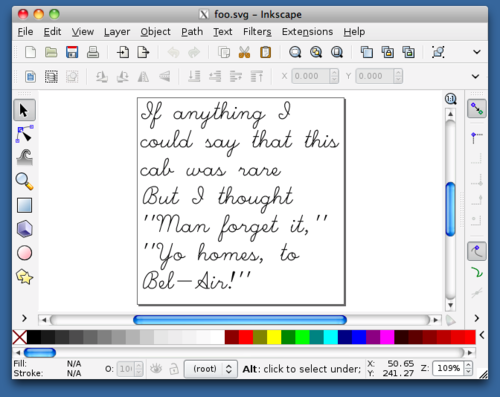 And save it as G-Code for plotting on the Unicorn! 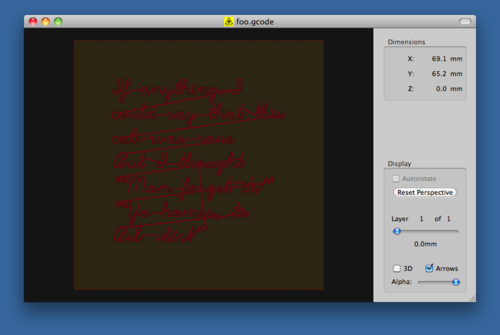 Matt Griffin was kind enough to plot it for me on one of the Thing-O-Matics at the BotCave: 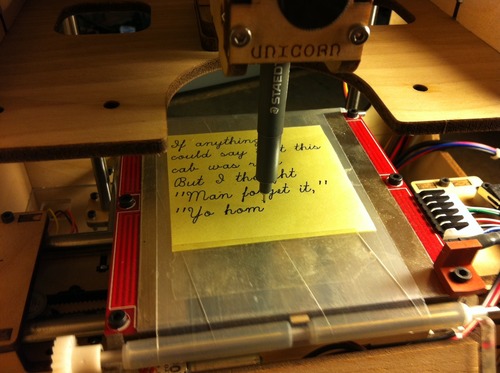 You can play with it here: http://schmarty.net/hershey_js_demo/

In the previous posts in this series, I hacked up a Canon camera to take pictures with an electronic trigger, built a cable to connect the camera to my MakerBot, and hacked the MakerBot’s firmware to enable it to trigger the camera in response to commands from the controlling computer.

The final step was to hack the desktop software that controls the MakerBot - ReplicatorG.

[ReplicatorG] is the software that will drive your CupCake CNC, RepRap machine, or generic CNC machine. You can give it a GCode or STL file to process, and it takes it from there. Its cross platform, easily installed, and is based on the familiar Arduino / Processing environments.

For my purposes, ReplicatorG provides two things. First, RepG is a user interface for controlling the MakerBot hardware: 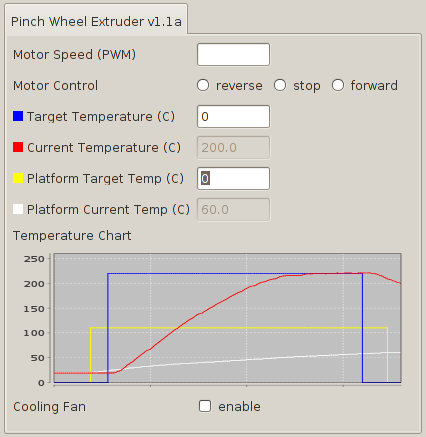 Second, RepG reads G-code files describing how to build an object, and transmits them to the MakerBot over the USB: 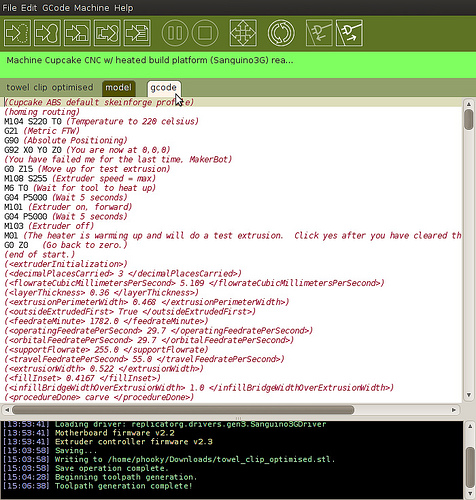 Of course, ReplicatorG is open source, and the code is available on GitHub! So, it was simple to clone their repository and start hacking on it myself.

You can find the code required for these changes in this commit on GitHub, but I will try to briefly break them down here:

Compiling and Running the new ReplicatorG

Compiling ReplicatorG is pretty simple, so long as you have a reasonable JDK environment and have Ant on your path. There are basically two steps:

ReplicatorG will be compiled and packaged up into the dist/ directory in two forms: an installable package for the chosen platform, and an unpacked version that you can run directly.

Opening up my modified version of ReplicatorG, I selected the “EXPERIMENTAL - Cupcake CNC w/HBP and remote camera” profile from the Machine -> Driver menu, opened up the control panel, and was happy to see this: 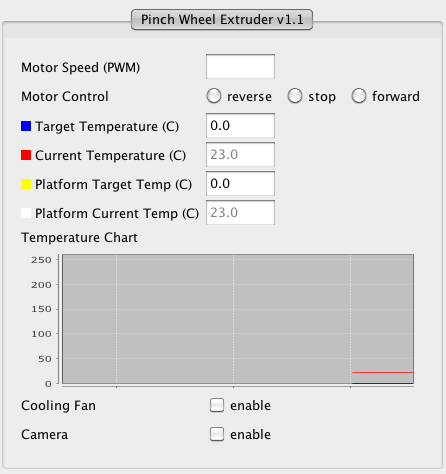 After hooking up my camera to the extruder controller’s D9 port, and starting the Remote Button script on the camera, I was able to take pictures by quickly toggling the camera checkbox on and off. I could also leave the checkbox activated to make the camera take pictures continuously.

Being able to trigger the camera by hand is all well and good, but my goal was to take pictures automatically at the end of every layer. To do this, I needed to be able to embed camera trigger commands in the G-code for building each individual object.

Looking at the ReplicatorG G-code docs, and the (machine-specific) M-code docs, I chose two codes for working with the camera:

I may have to change these in the future, as the main ReplicatorG development team claim G- and M-codes for other features, but these work for now.

Modifying ReplicatorG to accept these M-codes (GitHub commit here) was straightforward: update GCodeParser.java to recognize the codes, and call the appropriate triggerCamera() and stopTriggeringCamera() methods.

I could now construct a G-code file which, when “built” in ReplicatorG, would take a picture on demand:

Finally, it was time to edit up the G-code for the models I want to photograph.

Typically, G-code is generated by taking a 3D object in STL format and running it through the Skeinforge tool. Skeinforge is a set of Python scripts, which means it is not too difficult to insert your own code.

For now, however, I decided to make a simple hack using a Perl script I wrote called add_camera_events.pl. It works by looking for (</layer>) comments, which signal the end of a layer of printing, and inserts lines to:

You can find the source for this script in the add_camera_events.pl gist. The source for all of my changes to ReplicatorG are on GitHub, in the “schmarty-camera” branch of my fork of ReplicatorG.

And with that, the computer aspect of this system was finally done!

So… does it work? You bet! Stay tuned for more examples and a breakdown video of this whole project in the final post in this series!