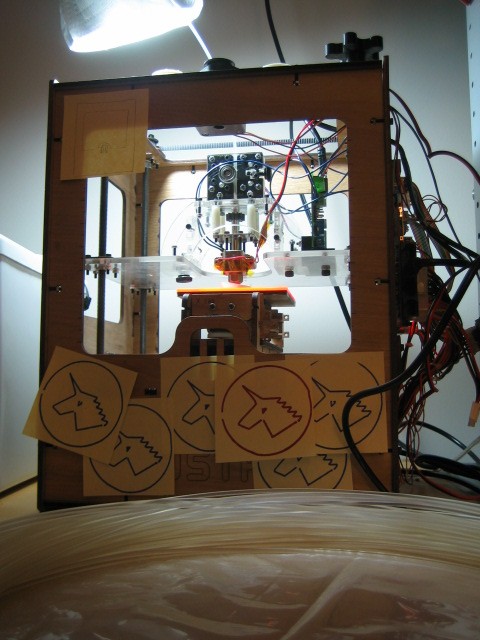 Actually, all sorts of new and exciting nonsense has happened to MakerBot #131.

I was excited to order get my MK5 Plastruder kit and join all of the cool people who have left the pinch-wheel and nichrome behind.  Unfortunately, I ran into some problems early on, and after buying some cool thermocouple parts to try calibrating everything, finally determined that I had a bad thermistor.

So, I decided to put the MK5 aside and moved on to some entirely unrelated projects.  I assembled a Cyclops 3D scanner (I need more practice, but it’s promising!), and printed a pink, printable version of the Unicorn pen plotter (with some better-than-expected results - hence the Post-It Notes all over the ‘bot).  I had generally decided that the MK4 was Good Enough, and would come back to the MK5 when it died.

That was all, of course, before the new MakerBot PLA 4043D came out.  Once I got my hands on it, I had to go for the upgrade.  So, MakerBot #131 is now running the MK5, with the new relay board mounted with the official mounting kit, and the extruder controller mounted with donutman_2000’s awesome printable mount.

Stay tuned for details about my experience with the new PLA!  I am excited.