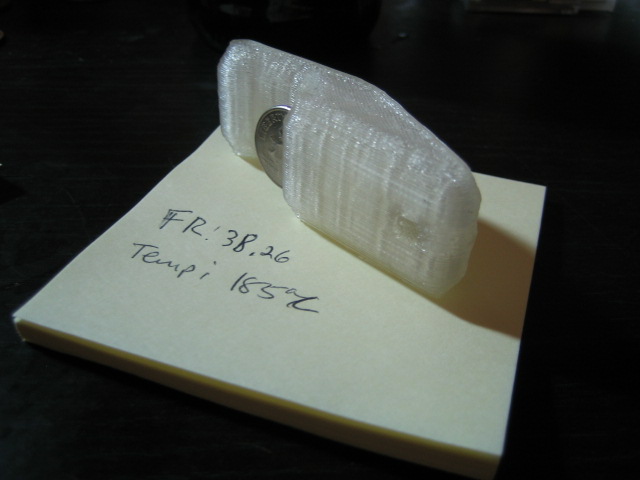 As I said in my last update, I finally upgrade MakerBot #131 with a MK5 extruder because it reportedly works great with the new PLA 4043D.

I’ve been having fun printing with the various colors of ABS that MakerBot offers, but have always been somewhat envious of folks that have been printing successfully with PLA. I bought 5lb roll of the original 4032D that MakerBot sold, but ended up putting it on the shelf after reports from other operators that it was destroying their MK4 extruders.

Getting the new PLA printing was surprisingly easy, given the challenge of using a new extruder (which needed temperature, PID, and flow rate calibration) and it’s the first non-ABS plastic I’ve printed, so it will have different optimal printing temperatures and more.

I haven’t carefully calibrated the thermistor on my MK5, and I wasn’t sure of the right temperature to extrude PLA, so I started by setting the temperature to 180ºC and attempting to push some filament through by hand.  I raised the temperature slowly until it became easy to push through by hand, around 195ºC.  I had not yet locked down my PID settings, so I was getting some wild temperature swings.  To be safe, I set the temp to 200ºC and started printing my favorite bottle opener from Thingiverse.

It turns out the flow rate for the MK5 is a lot higher than it was for the MK4.  After putting down the raft, I was having trouble with the filament stripping inside the MK5 due to backpressure.  Still, by paying attention to the print and tightening the thumbwheel whenever the filament slipped, I was able to get a completed bottle opener.

It was then that I noticed two things:

To fix the stripping and sagging problems, I figured that I should increase my Feedrate - the speed at which the platform moves to catch the extruded plastic.  I figured that a too-low Feedrate would cause some back pressure when printing the raft (leading to stripping), and would contribute to sagging overhangs.  I also guessed that the sagging is due in part to the high thermal mass of liquid PLA allowing it to sag before it cooled, so a lower extrusion temperature would let it solidify sooner, leading to less sagging.  I still use skeinforge-0006, so these settings are in “raft.csv” (various temperatures) and “speed.csv” (Feedrate), respectively.

So, some calibration prints: 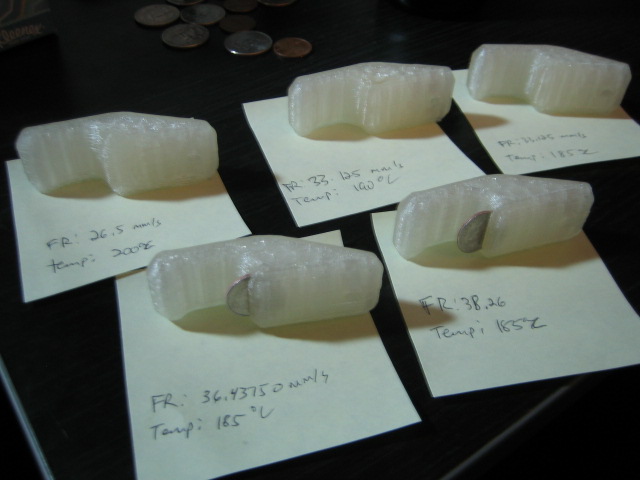 Starting with my first successful print in the upper-lefthand corner, with the temp of 200ºC and a feedrate of 26.5mm/s (which was working for my MK4), I slowly lowered my temp and increased feedrate.  At 180ºC I had a failed print due to the PLA freezing up, so I am going to stick with 185ºC going forward.  Increasing the feedrate by 25% immediately solved my filament stripping problem, but still left a pretty nasty top layer.  Increasing beyond that smoothed out the top pretty well, and left clean enough slots that I could actually insert some coins, albeit dimes rather than pennies.

I may try increasing my feedrate further, but I found an odd result when going from 36.4375mm/s (slower, should have thicker walls) to 38.26mm/s (faster, should have thinner walls). Namely, they both seem like very solid objects, but the dime slid nicely into the slower-printed version using the edge of a desk, while I had to take a hammer to the faster-printed version, and actually ended up bending the dime rather than driving it into the plastic (PLA is tough stuff!).  I would have expected the opposite.

Anyway, I hope these results are useful for some folks.  I hope to improve my calibration a bit more, and trying out the MK5 with my old roll of PLA 4032D.